The series "Sex and the City" has a special place in the hearts of many people. Good luck and hardships, love troubles, career successes and simple everyday joys - all this together with four beauties shared the world for six years from 1998 to 2004. In 2008, a full-length picture of how things happened after the events of the final series (without spoilers!) Came out, and in 2010 a sequel arrived.

All this time, the audience was agitated not only by the plot lines of the series, but also by the dresses of the girls, as well as the interiors in which they were located. A whole generation of girls tried to be equal to the main character Kerry Bradshaw in everything - they copied not only clothes, but also a way of life and even life. Her apartment is so familiar to us, as if we ourselves had lived in it for these six years. It is about the Kerry kitchens from the series and films that we will talk about today.

Bachelor kitchen and "sweaters in the oven"

Thrift is not the most powerful feature of Kerry. We all remember the storage of sweaters in the oven and jokes like "The only thing that I still managed to do in the kitchen is a mess and a few small fires." This explains the simple interior of her kitchen in the series: U-shaped kitchen set beige-olive color, eggshell-colored walls painted alone in one of the series, a simple refrigerator and stove, which Kerry uses only to light a cigarette. 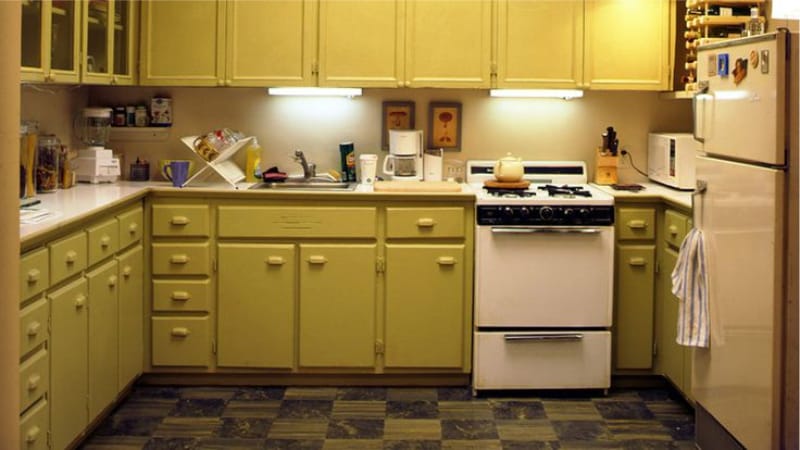 The room itself occupies the space in the center of the apartment and has an open entrance from the entrance hall.

For eating, there is a place for only one person, isolated by walls - not the most convenient solution for real life, but from the point of view of convenience of the shooting process - it is quite justified. Perhaps we will not focus on the serial kitchen and immediately move on to the kitchen interiors in the full-length films Sex and the City.

In the first film, Kerry’s apartment after renovation appears in an updated form and reflects both the bold character of the main character and global changes in her life. Unfortunately, the interior of the kitchen remained behind the scenes, but considering the general style of the house, it can be assumed that it is also based on a combination of white and blue, which, depending on the angle of illumination, changes from turquoise to heavenly. Let's give vent to fantasy and imagine how Kerry's kitchen could look like in the first movie, Sex and the City. Most likely, the problem of a small space rose sharply before Kerry, therefore White color would be a great choice. The fancy technique is useless in the case of the main character, the most necessary thing here is a microwave, a toaster and accessories for storing wine. 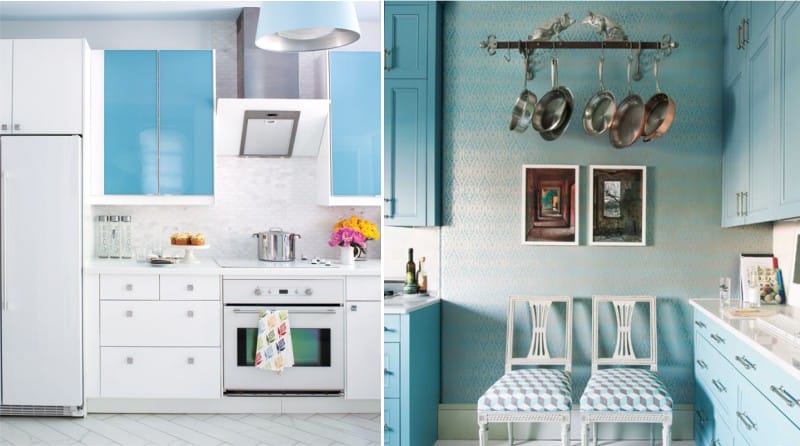 You can also do without a large table, because Kerry usually eats anywhere, just not at the kitchen table. If you think about the finishing materials and interior styles, then imagine Miss Bredshow in interiors filled with wood like Country music or Provence it turns out with difficulty, another thing - glossy surfaces of styles Art Deco, contemporary and fusion.Here, cabinets are likely to be filled with books about style, not cooking, and on the working surface there will be a place for flowers in a vase, and not products on a cutting board. However, all these guesses are confirmed in the second film, released on screens in 2010.

The interiors of the second film made a real sensation. The apartment of Carrie and Mr. Big is eclectic. It combines several design directions at once - mostly Art Deco, Classics and Aesthetics of the 60s. Male in essence, but feminine in details, she fascinates immediately. The kitchen is no exception. This is a great example of how to combine different styles in the same space, and a guide to action for couples who are trying to compromise when repairing. 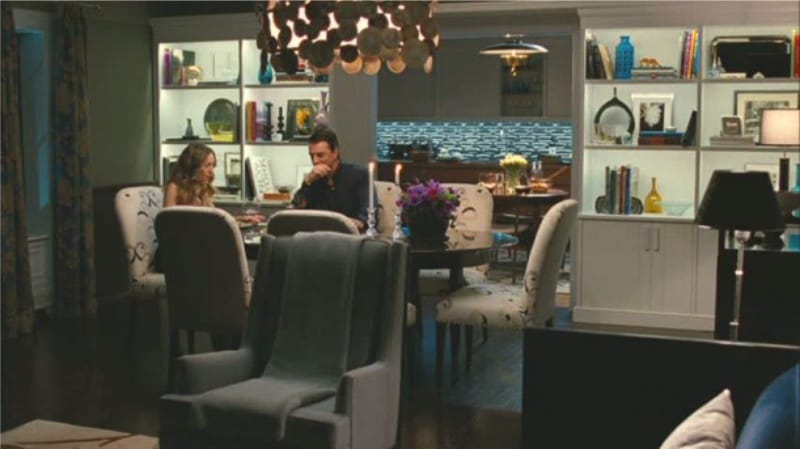 Realizing that in the kitchen in the family nest of Big and Kerry, the shape is more important than the content, the art director Jeremy Conway arranged it for the owners - elegantly and stylishly. The apron is faced with an unusual ceramic tile of deep blue Heath Ceramics from Ann Saks. Wall cabinets are made in glossy white color, and the lower part is made of wood, which further emphasizes the contrast of styles. The dining area is highlighted by a carpet with a geometric pattern in the spirit of the 60s, which in real, not stage kitchen, definitely would not have taken root. 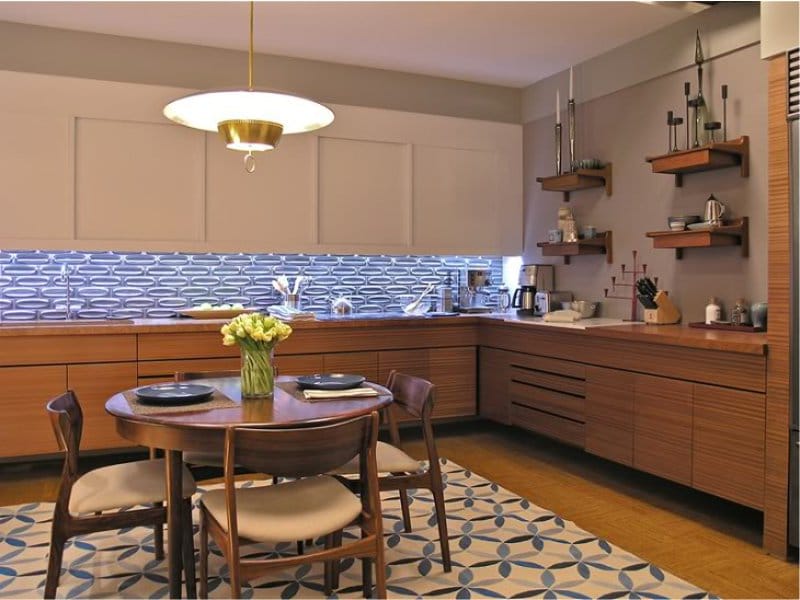 In the dining area, combined with the living room, we see a huge chandelier of oxidized metal from Property, hanging above the table of the 40s of the last century in mahogany in French style from Alan Moss, and the chairs are upholstered in fabric from Lee Jofa. 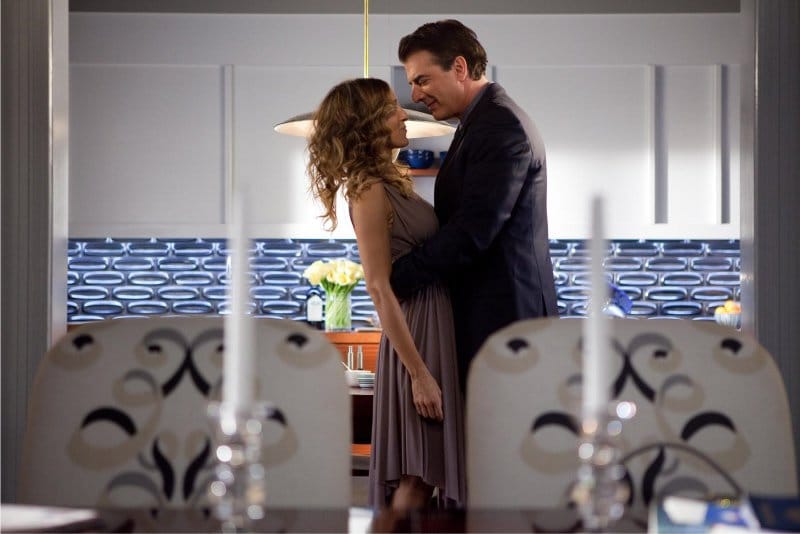 We like all these interesting details: the drawing on the upholstered Martin Alberts chairs, lamps and a mix of books, colorful vases and ceramics from End of History in the bookcase. 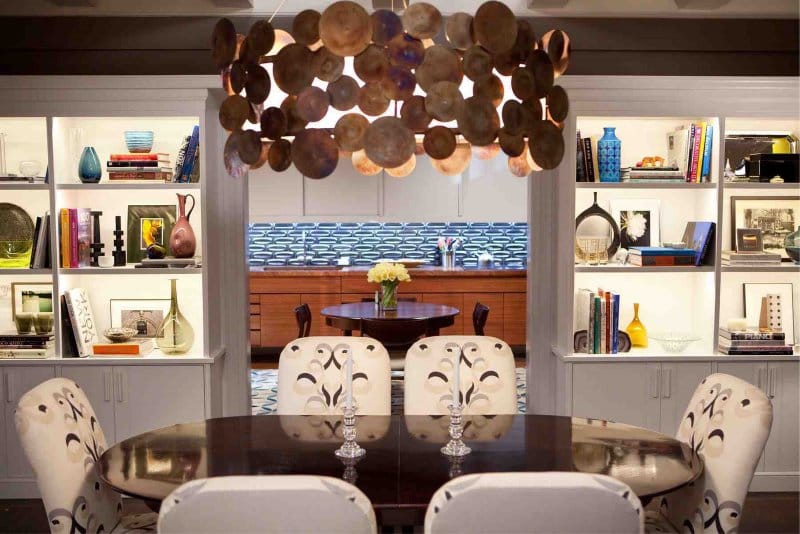 Finally, we will share what we found on the Internet for fans of the series who want to contribute a share of "Sex" to their kitchen.

Kerry's famous saying: “I use the oven as a storage cabinet!” Found a funny reflection in the kitchen rug. Look.

Also at Etsy, we found interior cushions made from the same Lee Jofa fabric, which is upholstered in the dining room. Look.

If you also like the heroine of “Sex in a big city” adore the cocktail “Cosmopolitan” pay attention to the set of such “martinas” that can be bought in many stores of dishes, we recommend looking towards the famous Spiegelau company, which is popular even among famous sommeliers .

A kitchen apron can be the main accent of the kitchen, you can choose an interesting texture, color or pattern, like at home in Kerry and Big. It can be glass, mosaic or even stone. Many ideas for the design of a kitchen apron can be seen on the Ann Sacks website, which inspired the film decorators. 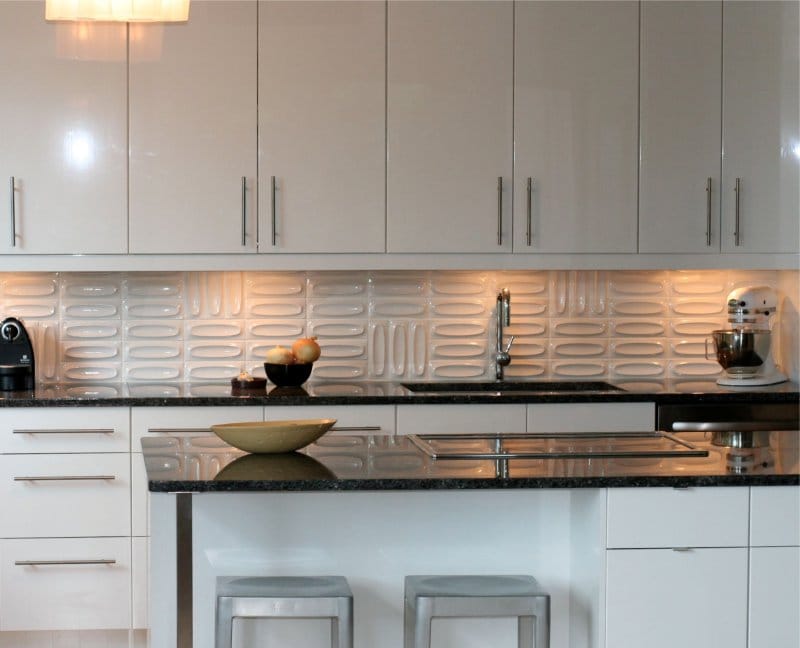 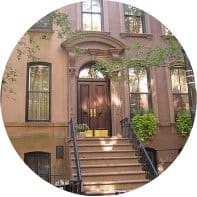 A couple of years ago, the apartment where the series was filmed, located at 64 Perry Street, was sold for £ 6 million. An impressive price, isn't it? Would you live in a Kerry apartment? By the way, the monthly rent in the 90s was equal to 700 US dollars, which in our days, taking inflation into account, would have been equal to 2500 dollars.

Share your opinion on the Kerry kitchen in the comments. We, in turn, wish every young lady to find her Mr. Big and share with him pleasant culinary moments in the kitchen.