Low ceilings with a height of 2.4-2.5 m are a characteristic feature of typical panel houses, which must be reckoned with when planning renovations and kitchen design. In this material you will find 15 simple techniques that will help you visually increase the height of the kitchen, a few tips on what you should not do, as well as a selection of 30 photos of real low kitchens.

In general, the ceiling and walls should not be white, the main thing is that they should be of the same tone. This technique will erase the boundary between the surfaces, and as a result the kitchen will appear higher.

Headsets up to the ceiling itself can be completely white or only partially, namely in its upper part. So the facades of wall cabinets will merge with the ceiling and will not “cut” the walls horizontally. If the set is low, then the facades for the upper cabinets should be chosen to match the walls. 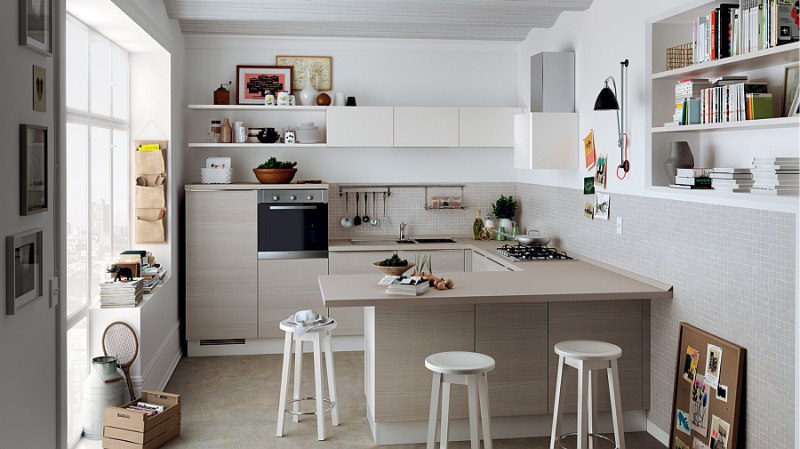 Our goal is to bring as many vertical lines as possible into the interior. If you are creating a kitchen design from scratch, then we recommend choosing headsets with paneled, and better rack-like facades like in this photo. 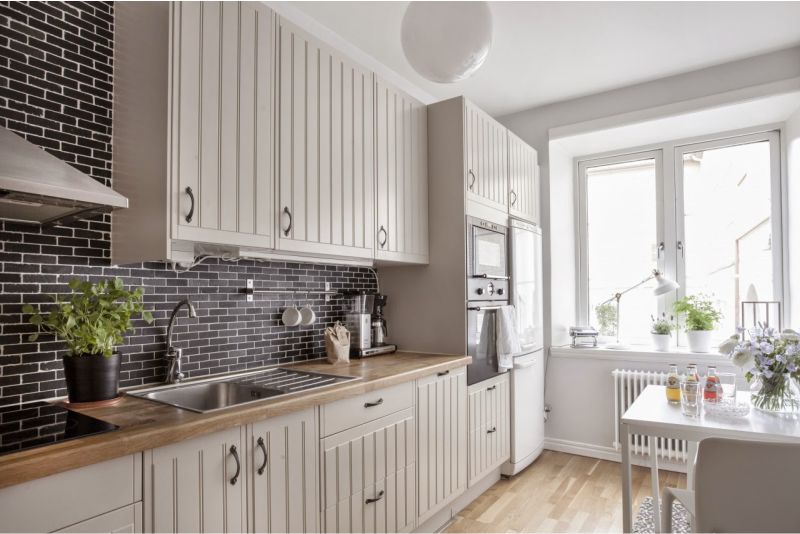 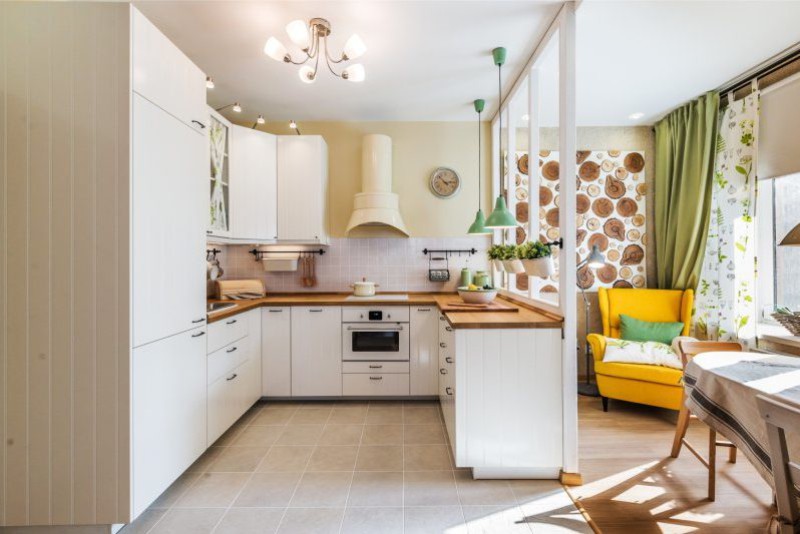 Vertical striped wallpaper creates the desired optical illusion, visually stretching the walls upwards. You can glue striped wallpapers on one accent wall or on all four at once. By the way, the canvas with such a print is much easier to dock, and the seams between them are almost not noticeable.

Not only striped wallpaper, but any wallpaper with vertical lines will work to increase the height of the kitchen. Images of trees, stretching up plants or, say, vertically built repeating elements, if they do not increase, then they definitely will not lower the already low ceilings.

Rhombic wallpapers can also fool our eyesight so that the kitchen will appear higher. At the same time to narrow the space, in contrast to the striped wallpaper, they will not. 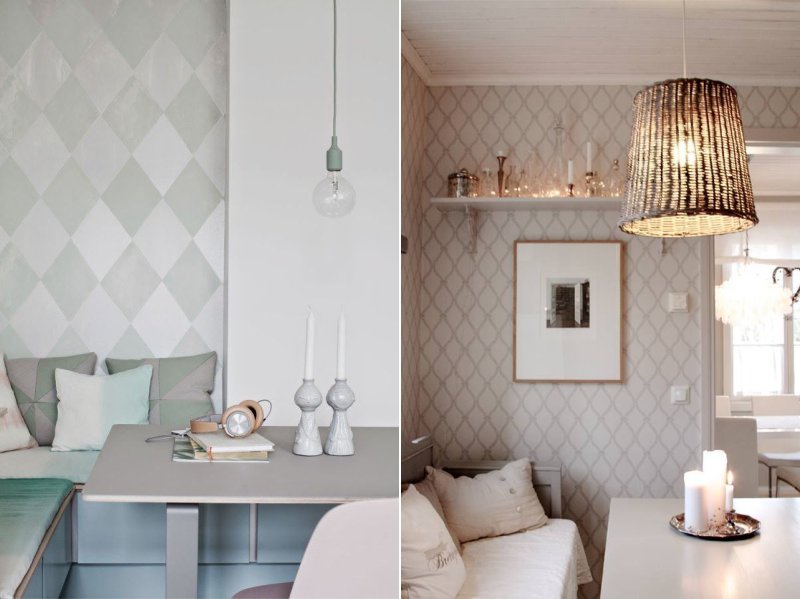 Wall cladding white clapboard is popular in the Scandinavian countries, where ceilings in typical homes are often low. Adopt this technique, and you, because White color and vertical lining lines will work doubly efficiently. 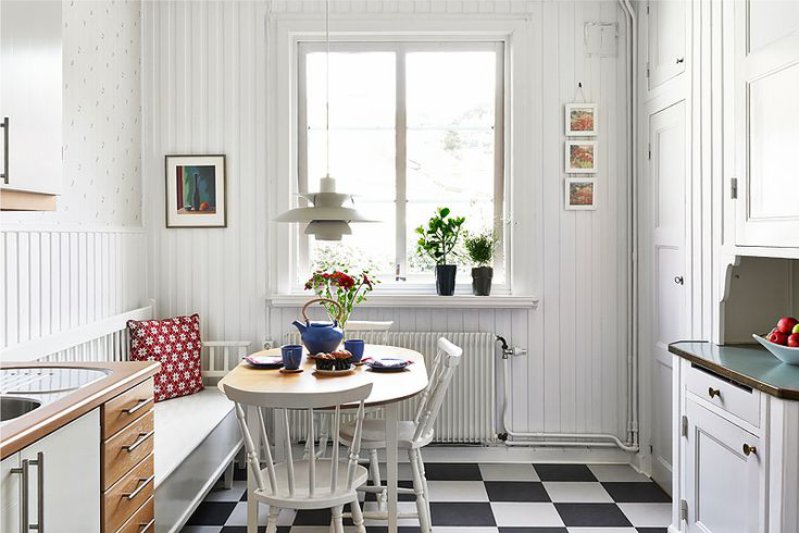 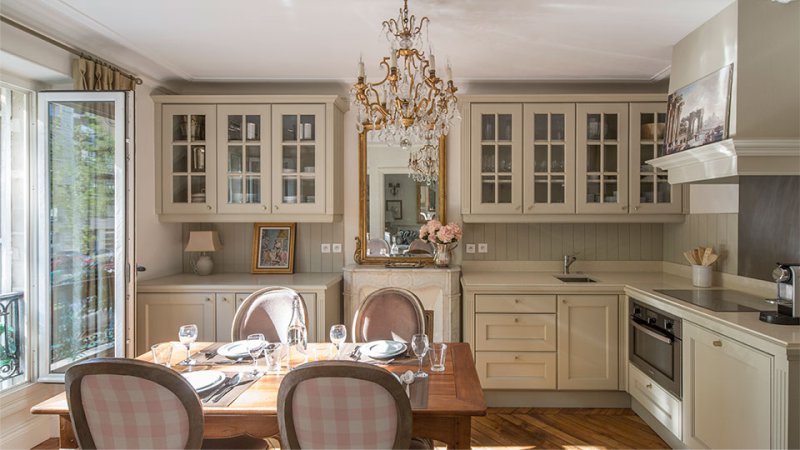 Suspended ceiling structures for a low kitchen is contraindicated, but a two-level ceiling with illuminated niche can create the illusion of a high ceiling.

For example, in this classic kitchen, a niche in the ceiling mimics a stained glass window, and its lighting replaces a chandelier.

The "window" here is made of plexiglass. The moldings framing it - from polyurethane. And the ceiling itself is made of plasterboard. 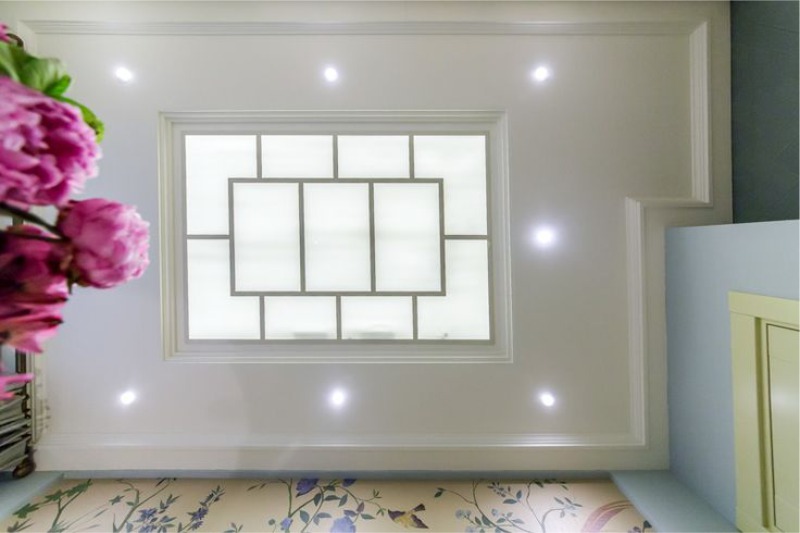 Dark colors, for example, dark blue, black, graphite, etc., have the property of visually distancing objects and surfaces. So, the floor, trimmed with dark tiles or dark wood, would seem to fall down and thereby increase the height of the kitchen. 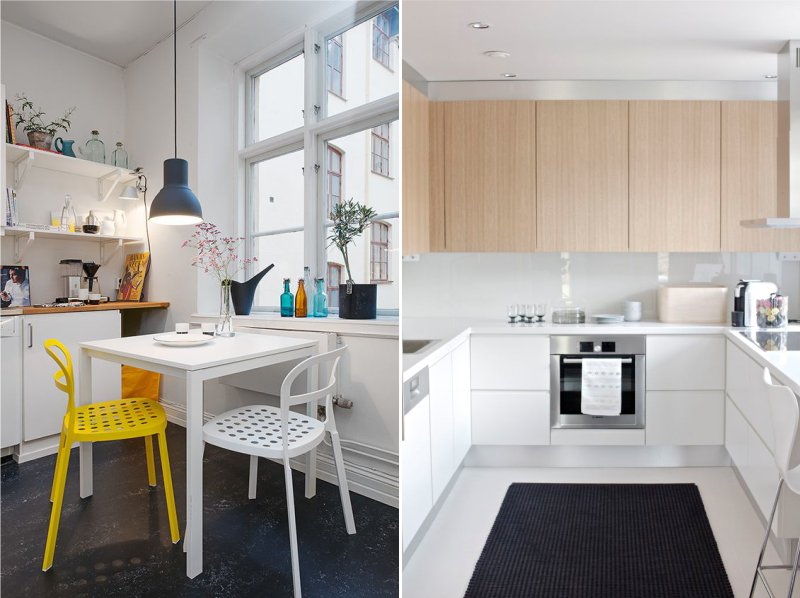 One or two floor lamps and / or wall lamps, the light of which is directed upwards, will be enough to create the effect of a higher and “airy” space. And all because reflected from the ceiling and walls, the light will be distributed more evenly and will not create harsh shadows.

Not bad lift the ceilings and increase the space of large mirrors, especially in facing one or two walls of the kitchen. In the next photo slider, you can see how the low kitchen-dining room in the panel house was transformed from two mirrors from floor-to-ceiling height. 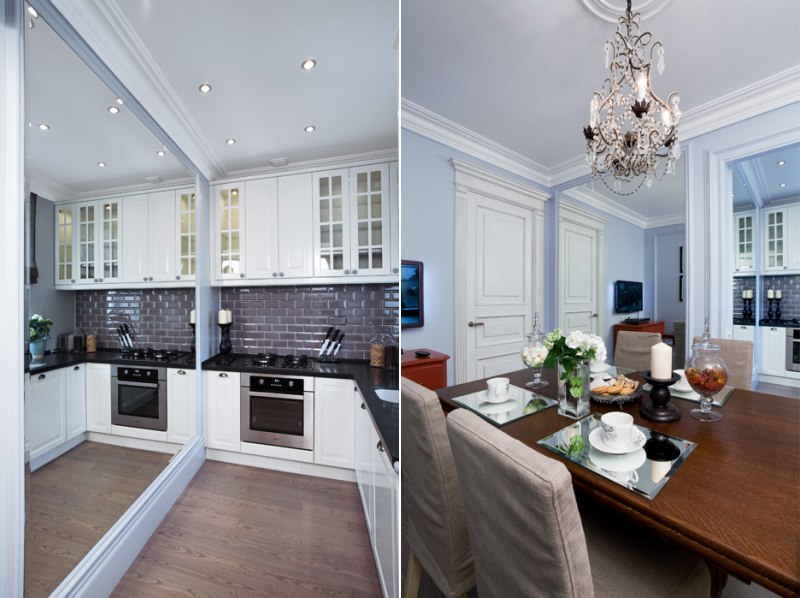 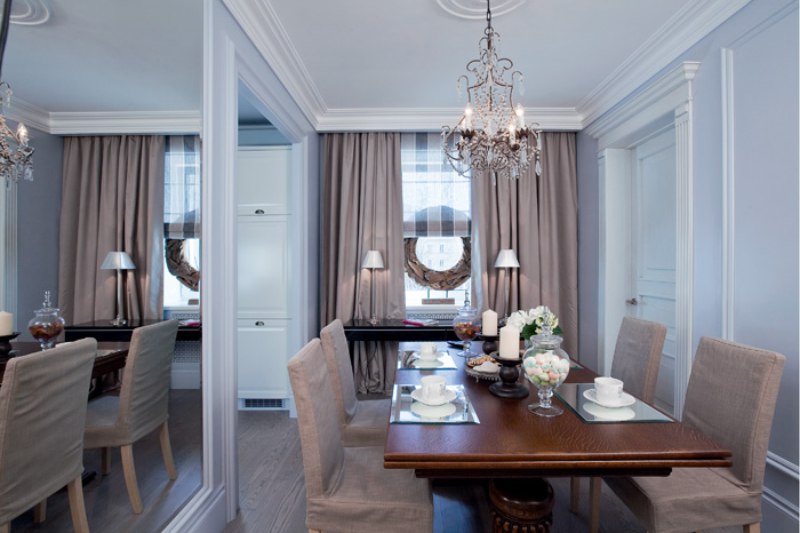 Read also Guide to the choice of mirrors for facing and decorating the kitchen.

Curtains should pick up long, that is, concerning the floor or even lying on it as shown below in the photo. Suitable styles of curtains - assembled in a uniform fold, panel (Japanese) or cotton (mustache). 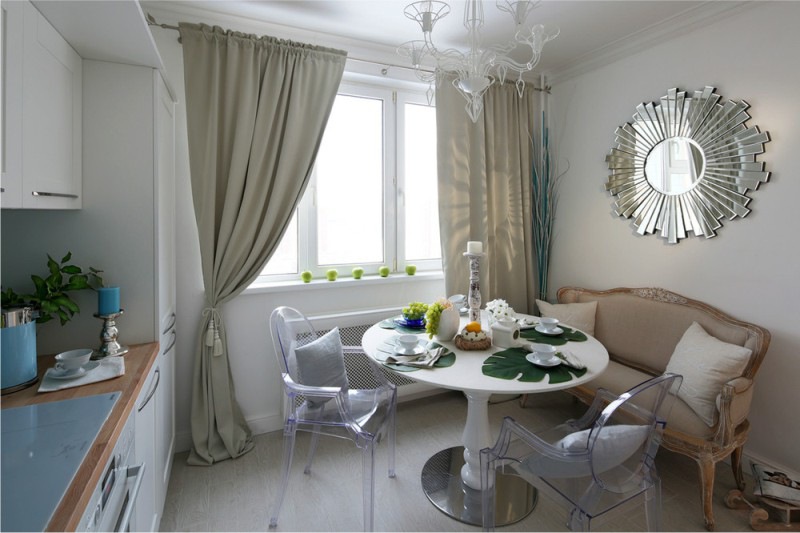 It is desirable that the fabric had a vertical pattern, that is, all the same stripes, rhombuses, floral motifs, etc. 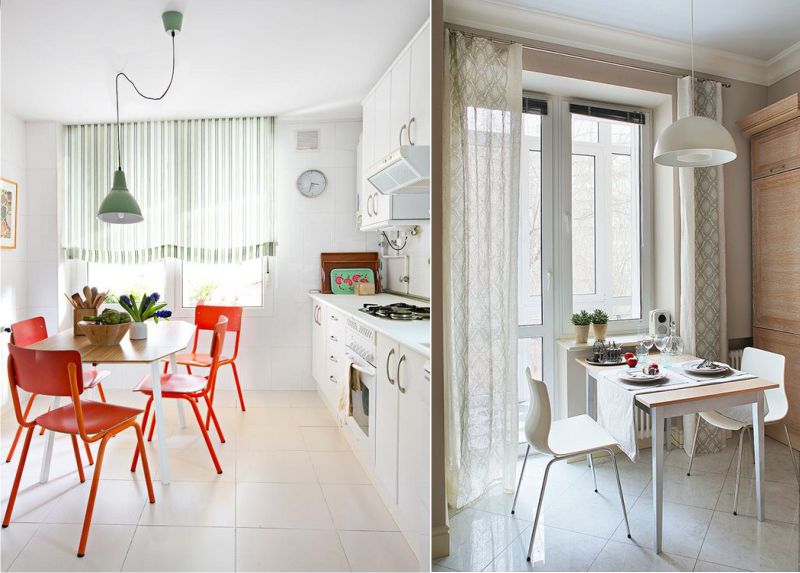 Whatever the curtains you choose, the curtain rail should be installed under the ceiling. The ideal choice is a roof rail. More about the eaves for the kitchen.

Suspended chandeliers in the kitchen with low ceilings will practically touch the heads of its inhabitants, visually overload the interior, shade even more and “lower” the ceiling itself. Spotlights and ceiling lights look, though not as elegant as the chandeliers, but they take up less space and create more pleasant and even lighting.

Floor plinths should choose low, preferably in the tone of the walls or universal white.

Pictures, posters, panels or decorative plates can also contribute to an increase in the height of the kitchen. To do this, they need to hang just above eye level, as shown in the photo below or in a row vertically. It is also desirable that the wall decoration pattern contains vertical lines. All this can be found in our section. Dressing. 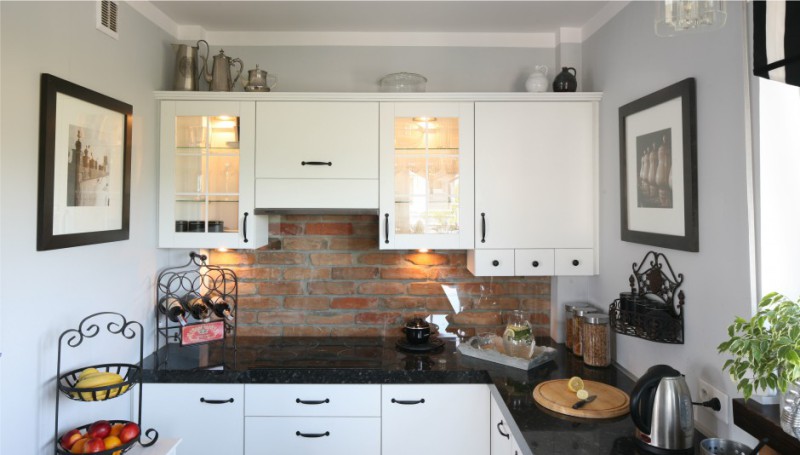 The design of the kitchen with a low ceiling has some limitations that you should be aware of in order to avoid a mistake. Here is a small list of them: