A kitchen tap provides us with water dozens of times a day. Not surprisingly, it fails more often than in the bathroom. Before you call a plumber or buy a new mixer, you should try to repair it with your own hands.

If you are reading this article, it means that one of these breakdowns has occurred with your mixer:

What you need to repair

Before you begin to repair the kitchen faucet with your own hands, you need to prepare all the tools and necessary components of the crane.

Also repair requires additional materials - dry rags, lubricants. And if the crane is leaking, you will have to purchase spare parts: a new cartridge or its parts (for a single-lever mixer), seal rings, a crane-box (for a two-component design).

There are four reasons why a crane should be repaired:

What to do if there is a defect on the case? You can try to repair it with cold welding - sealant (putty). But this, nevertheless, is a temporary measure, and soon it will be necessary to change the mixer after all.

If the problem is a weak head of water, then most likely the reason for the blockage of the aerator. Then you need to get it, clean the mesh, for example, with a toothbrush, and then install it back.

When the valve flows without visible damage, the case is most likely in violation of the integrity of the gasket or in the breakdown of the cartridge. In this case, a complete disassembly of the kitchen single-lever mixer is required.

How to disassemble the faucet? First, turn off the water and let the remains of it from the tap. Then explore the device single lever kitchen tap in the photo.

Now we will begin repair step by step:

Tip! You can disassemble and repair the device, even if you do not have a hex key. To do this, gently knock the fastening nut with a hammer on a screwdriver.

Tip! Heading to the plumbing shop for a new cartridge, take the old one with you so that you don’t lose money with the size, because the cartridges are not standardized - they are manufactured in a wide variety of diameters and materials.

New cartridge is installed so that its holes are aligned with the holes inside the mixer body. Then we fasten the washer back (first with our hands, then tightly, but not too tightly with the key).

How to change the gasket in the mixer? It is also quite easy. It is necessary to remove the old sealing rings and change them to new ones, on which we first apply a little sanitary lubricant.

Tip! For all rubbing parts of the product, you should use a non-toxic silicone-based lubricant. This will increase the service life of structural elements in half.

How to fix this type of mixer? It is necessary to disassemble and replace worn elements - crane-bush and / or gasket.

The sequence of works in this case will be as follows: 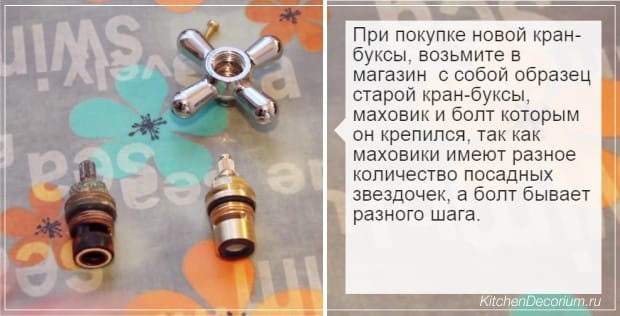 Often valve faucets need to be repaired due to the fact that they have leaked the gland. Then it must be disassembled according to the same algorithm and replace the worn gasket. 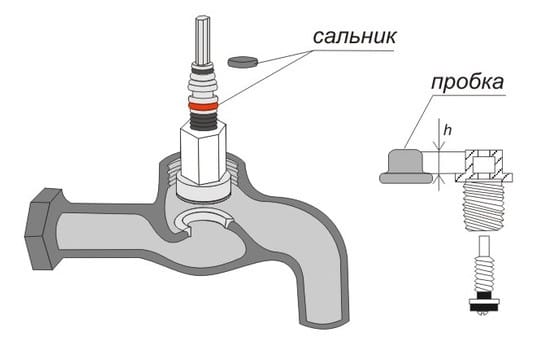 And sometimes in order to adjust the valve, it is enough just to fix the stuffing box sleeve as shown in the video:

Tip! Replacing the packing is needed only when the sleeve is tightly tightened and the flow is still present. As packing, they are used (for old mixers):

If you see that the thread is worn out on the details, then it means that the time has come to update the plumbing.

The ability to repair a kitchen faucet yourself is a great way to save money. However, repair is not always able to fully restore the efficiency of the crane and it is often easier to simply change the mixer in the kitchen.

Keep in mind that: